This Is An Uprising Review 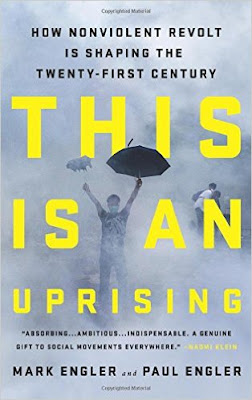 
This Is An Uprising: How Nonviolent Revolt is Shaping the Twenty-First Century
by Mark Engler and Paul Engler
Nation Books
February 9, 2016
(343 pages)


This book is so good! It was so nice to read something that theorizes social change amidst recent and relevant uprisings. The writing is solid and easy to read, interweaving analysis with the Civil Rights Movement as well as the Arab Spring, the Occupy Movement, and Black Lives Matter.


The most important thing I got from this book is that a lot of times when there is social change, commentators dismiss it as an inevitable product of the times. Engler and Engler are saying, no, change is the product of deliberate plan and action.


Non-violent action is not just a moral prerogative. It works-- better than violent resistance. With violent resistance, you are playing right into the hands of the state because they can always overpower you. But if you befriend the police and military and resist nonviolently, you're much more likely to find the opposition melting away.

Erica Chenoweth, a military-trained professor, was skeptical of a non-violent conference she attended. She felt like the research wasn't solid enough to be convincing. So she offered to do the research with them. She found, after reviewing 323 campaigns, that “nonviolent movements worldwide were twice as likely to succeed as violent ones.”


Engler and Engler outline two basic types of resistance: transactional and transformative. Transactional movements go for concrete, pragmatic goals. They are long-term, hierarchical organizations that aim for sustaining change. Transformative mass movements tend to come into being during insurrections. They focus on symbolic achievements over smaller goals and take advantage of the momentum of the situations.

While the book advocated more for transformationl change, these two approaches need not be mutually exclusive. Otpor, the organization that dismantled Milesovic's regime, for example, was a hybrid of both tactics. Otpor used stunts to ridicule Milesovic and then use those stunts as jumping off points to recruit more volunteers. The volunteers would attend ten hour orientations that would leave them prepared to instigate their own actions. They had a long-term plan of uniting around an opposition candidate, running free elections, and then forcing Milesovic to step down through civil non-participation.

With only a 3.5% active minority, you too can change the world. This book will tell you how.