BLOG TOUR: DON'T ASK ME WHERE I'M FROM by Jennifer De Leon

First-generation American LatinX Liliana Cruz does what it takes to fit in at her new nearly all-white school. But when family secrets spill out and racism at school ramps up, she must decide what she believes in and take a stand.
Fifteen-year-old Liliana is fine, thank you very much. It’s fine that her best friend, Jade, is all caught up in her new boyfriend lately. It’s fine that her inner-city high school is disorganized and underfunded. It’s fine that her father took off again—okay, maybe that isn’t fine, but what is Liliana supposed to do? She’s fifteen! Being left with her increasingly crazy mom? Fine. Her heathen little brothers? Fine, fine, fine. But it turns out Dad did leave one thing behind besides her crazy family. Before he left, he signed Liliana up for a school desegregation program called METCO. And she’s been accepted.

Being accepted into METCO, however, isn’t the same as being accepted at her new school. In her old school, Liliana—half-Guatemalan and half-Salvadorian—was part of the majority where almost everyone was a person of color. But now at Westburg, where almost everyone is white, the struggles of being a minority are unavoidable. It becomes clear that the only way to survive is to lighten up—whiten up. And if Dad signed her up for this program, he wouldn’t have just wanted Liliana to survive, he would have wanted her to thrive. So what if Liliana is now going by Lili? So what if she’s acting like she thinks she’s better than her old friends? It’s not a big deal. It’s fine.

But then she discovers the gutting truth about her father: He’s not on one of his side trips. And it isn’t that he doesn’t want to come home…he can’t. He’s undocumented and he’s been deported back to Guatemala. Soon, nothing is fine, and Lili has to make a choice: She’s done trying to make her white classmates and teachers feel more comfortable. Done changing who she is, denying her culture and where she came from. They want to know where she’s from, what she’s about? Liliana is ready to tell them.

FPD: I love that reading this book felt like Liliana was speaking directly to me as a reader. Was there any specific reason why you chose to write the story this way?

JDL: I’m so glad you felt this way! At first I wrote it this way in order to get the story down. It was like I had to trick myself into writing it, take the pressure off of making it “sound” literary or what not. Instead, I told myself—just write it how you hear it. Write it in a way where it’s as if Liliana is telling you the story herself. After I did that, there was no question that I wanted to keep it in her voice and in first-person.

FPD: What would your six-word autobiography be and why did you choose those words?

JDL: My six-word autobiography will forever be Don’t ask me where I’m from! How can it not be?! But seriously, this title comes from a scene in the book where Liliana is at a creative writing center called 826 Boston and she and the other teens are asked to introduce themselves by way of a six-word autobiography. Once I discovered this little bit, I realized that this had to be the title.

FPD: I loved Liliana’s hobby of making miniatures. I’d love to know where that idea came from!

JDL: Thank you! My editor actually had the amazing recommendation that Liliana have another hobby, or just, something she does at home besides homework and chores and going on her phone. So I brainstormed a bit, and then suddenly remembered seeing an exhibit by the (real-life) artist Ana Serrano when I visited the Children’s Museum in Boston one day with my son. She makes miniatures out of cardboard and they are absolutely amazing.

FPD: "Don’t Ask Me Where I’m From” touches on so many ever relevant and important themes and topics (that will hopefully help keep the momentum of the current civil rights movements alive in readers.) Of the many messages in your book, do you have anything overall you hope readers can take away from it?

JDL: Thank you. You put it so beautifully. I love that—“help keep the momentum of the current civil rights movements alive in readers.” I do hope this book sparks many conversations, including difficult ones that we all need to be having. Ultimately, I also hope that this book allows young Latinx teens to feel validated, to feel seen, and to feel empowered to learn more about their cultural and historical backgrounds and never to feel ashamed of where they’re from.

FPD: As an OwnVoices story, I know that much of the details of Liliana’s life are things you experienced in some way yourself. Can you share any of your own personal stories that specifically influenced a piece of Liliana’s character/family/story?

JDL: I remember the first time I went to one particular friend’s house after school. It was late elementary school, but I remember feeling the same way Liliana does in the scene when she goes to her new friend Holly’s house for the first time. The house was huge and her mom was asking me lots of questions and they had great snacks! Everything was a shade of tan! They had lots of quilts. It was beautiful and very “New England.” I just remember thinking—wow, this home is different than mine—not better or worse, just different. So I tried to repurpose some of those details into the book.

A few of my own thoughts on the book!

When I began reading "Don't Ask Me Where I'm From", I immediately got the feeling of a friend telling me a story about her day. The way De Leon wrote Liliana's voice gave my reading a more personal, one on one feel that really helped me connect with her.

One thing I noticed was how I could much I could relate to Liliana—and in this way see the impact of her hardships when they deviated from my own life experience. I connected with Liliana in the way anyone can who grew up with financial struggles, the kind of family dynamic/family culture that prevents you from bringing friends home, wanting to change my name to be easier, etc...  Relating to Liliana on these similarities also put into perspective that while we may have the same struggles, the things that caused them were quite different. I learned things about deportation that I had not known before and as a mother, wanted to reach through the book and hug her mom.

I know that De Leon wrote this book to help LatinX youth feel seen, empowered, and validated, but man was it a good teaching moment for me. If you are working towards educating yourself about racial divides in our country and about every day microaggressions that are so naturally part of daily commentary for many of us, I highly recommend this book. I also liked the added element of how to our peers and leaders should be reacting/addressing racism and bullying through social media. It's thought-provoking and educational, as well as just an honest throw back for me to what it felt like to be in High School trying to make friends and find a place to sit at lunch time or having a new crush. 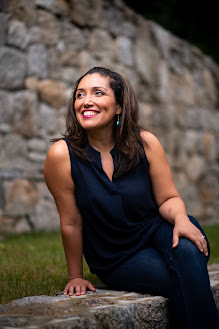 Jennifer De Leon is an author, editor, speaker, and creative writing professor who lives outside of Boston. She is the editor of Wise Latinas: Writers on Higher Education, the 2015–2016 Writer-in-Residence at the Boston Public Library, and a 2016–2017 City of Boston Artist-in-Residence. She is also the second recipient of the We Need Diverse Books grant. Don’t Ask Me Where I’m From is her debut novel.
Posted by Folded Pages Distillery at 1:00:00 AM